Futurism, an Agent of Change

I just finished my first YA fantasy, and it's in edit now. My next project will be to finish the Jezebel series. The target is about 40 from now--2054. There will be 9 billion people on the planet by then, one and a half today's levels, most of the growth occurring in Africa and Asia. Extrapolating the technology won't be as hard as finding possible solutions. There are a few problems to tackle, such as the fact that more than a billion, perhaps two, of that enormous population will be so poor they will be starving. Health care and education are also critical, but human dignity will take center stage in this story.

The female lead characters are already concentrating on solving the problems through:
The hardest part of any great endeavor is not the technology; rather, it is changing the tacit opinions of the society. Most of this education revolves around the treatment of women. Ultimately, parents and communities should handle the moral education of young boys. Corporations should also be leaders, paying living and equal wages instead of spending profits to maintain the status quo. (Can you guess who the villains in this story are going to be?) However, where they fail, media will need to pick up the slack. Therefore, the number one net show in my next story will be "Ball Busters", like Myth Busters, where they tackle a different public egregious wrong against women each episode. With over a million in revenue each week (plus corporate donations of gadgets in exchange for advertisement) they can tackle almost any issue.

The first issue they tackle is men who have the means but don't pay child support. Picture any episode of Cops where former military women from the US and Israel are given a photo of an offender and a warrant for a forced genilock. The chase him down and zap him in the balls with a device which prevents him from having any more kids until he takes care of the ones he's already made. His genitals have a "boot" on them like a car with too many tickets. The woman reporting the problem has all child support paid by the show as incentive. As far as reality shows, this would be dirt cheap. With population growth and abandonment so out of control, this practice could be accepted.

The larger issue they need to address is the tolerance of rape.The team finds a problem spot (gang rapes in country X, police non-enforcement, rape kits unprocessed, refugees attacked when they go for water, etc) where they sweep in, brain storm, and then address the issue. Hopefully others with the same problem are shamed into fixing it before the team needs to intervene. The mindset of the show is follow the laws that already exist and restate the mantra "No one should be subjected to this."

Technology available will be:
We have all this to some degree today. I'll just extend it and combine it. For example, they will distribute a mace-like spray with a built-in signal for help and a video feed. When used, the spray releases pink dye onto the suspect along with an enzyme like PDE5 which gets rid of any erection. Given that help is on the way, prosecution of the tagged and videoed man will be much easier.

Right now, only about 3 percent of all rapists spend any time behind bars. What I want to show in Jezebel 5 is a society that works to fix this problem, because until we do, we're shooting our future before it can be formed. A society that can address this problem can accomplish anything.
Posted by Scott Rhine at 6:55 PM No comments:

My son Pierce was just in the hospital for a week and recovered on pain meds for another week. Now he's catching up on homework. For one assignment, he needed to interview a family member about a great grandparent. Since Pierce interviewed me, I figured I would publish the interview in my blog.

Albert was my great grandfather. He was born in East Township, 1/11/1902 on his family’s farm in . His family, descended from a cabinet maker from the in , still spoke Pennsylvania Dutch. He attended in on a work-study program and shoveled coal to keep the school heated. He was ordained in the (before the split over tongues) and found his calling “repairing churches.” Whenever there was a problem, they would call him in. He could talk to anyone and always had a joke about any subject. His family moved a lot.
He was married to a younger Vera Valentine Eshlemann and had six children: Marlin, David, Stan, Eloise, Shirley, and Ken (my grandfather). She was good at baking pies, and after every meal she would hold up her hands and say, “I never owned a dishwasher my whole life, these were my dishwashers.”
By the time my grandfather was born, Albert’s oldest children were in the military. My grandfather joined too, because they were too poor to go to college without the GI Bill. When asked about President Eisenhower, Albert complained, “Ike promised our children would never again fight in foreign wars, and now my boys are in .” He preferred reading the comics in the newspaper. He told his grandchildren jokes like
“Who was the shortest man in the Bible? Nehemiah (pronounced Knee-high-miah) or Bart the shoe-height.”
“Where is baseball mentioned in the Bible? In the big inning.”
“Where are there cars in the Bible? The apostles gathered together and were in one Accord. Before that they only had motorcycles, the Triumph of Gideon was heard throughout the land.”
His last official church was in , where he married my Great Aunt Shirley and Great Uncle Larry. This is the place he lived the longest. After he retired, he bought a row house there a block from the church, where he could hear the clock bells. He maintained a long, narrow flower garden with snapdragons, Peruvian daffodils, and roses, which he gave clippings of to my grandparents. My grandfather gave children of the same daffodils to my parents. Even retired, Albert drove a 20 year old Dodge Dart to preach at two small local churches. He only stopped after a stroke ruined his night vision because he didn’t want to hurt anyone.
Albert and Vera visited one summer when Grandpa Ken was stationed in . Ken took him salmon fishing that weekend when he had off work. On Sunday, in the stream, Albert reeled in a prize on steel leader, a salmon so big it took five people to help wrestle into the net. His response was, “This is God’s joke on me. It’s the biggest fish I’ll ever catch in my life, and I can’t tell anyone because I caught it on the Lord’s day.”


When he died in late May 1984, the funeral was huge. The line to view the casket stretched around the block. The oddest person there was a mentally challenged woman in a raccoon-skin coat (in summer). Nobody recognized her. When asked, she said she met him at the bus stop. He was the only one who would talk to her, and he would be missed.
Posted by Scott Rhine at 12:10 PM No comments: 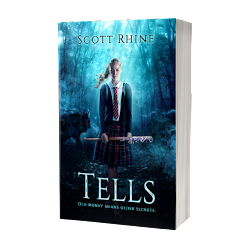 Scott Rhine
I have been writing Science Fiction and Fantasy for many years, and now that I've had some success on Amazon, I've have decided to write full time. My goal with each new story is to take something I love and share it in an exciting way with the audience.